Former competitive cheerleader Hadley Graham came to George Mason University in 2015 as a transfer student from Colorado. Because of her years in athletics, she chose kinesiology as her major. Graham’s goal was to become a physical therapist helping athletes recover from injuries.

And then she got sick. In the spring of 2016, Graham said she began feeling “very abnormal,” with bruising, blood blisters and breathlessness.

“I knew something was wrong,” Graham said. “I just pushed through finals before going to the doctor to see what was happening.”

Graham was diagnosed at age 21 with acute aplastic anemia, a rare blood disease in which her bone marrow stops producing enough red blood cells, white blood cells and platelets. Four years later, after treatment at the National Institutes of Health (NIH) and almost dying, Graham, 25, is in partial remission. She is graduating this month from the College of Education and Human Development with a degree in kinesiology. Graham plans on attending Shenandoah University in the fall to pursue a doctorate in physical therapy.

“I feel like I’ve been running this race for a long time with a lot of roadblocks, and I finally hit the finish line,” Graham said.

“She’s never let her illness stop her from moving forward,” said Stormi Woltz, student academic success coordinator and Graham’s former academic advisor. “She never let it be a barrier for her because she always planned ahead and sought out guidance from the support system around her. 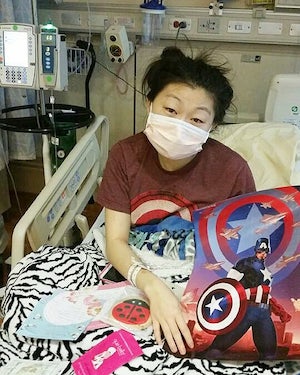 Born in South Korea, Graham was adopted by her mother, Diane, who a few years later married the man Graham calls her father. The family includes three sisters and a brother, who also attends Mason.

Graham’s passion as a teenager was competitive cheerleading. Graham attended University of Colorado at Boulder and then at Denver, before moving with her parents to the Washington, D.C., area.

Graham’s mother describes Graham as a happy-go-lucky young woman whose life was “just clicking along, her whole future ahead of her” when she got her diagnosis.

The only way Graham can be fully cured is through a bone marrow transplant. Adopted, Graham couldn’t turn to her relatives for a match. She has been on an international bone marrow registry since her diagnosis.

Without a match, Graham spent months in treatment as part of two NIH studies. She fought infection after infection. When she wasn’t hospitalized, she was quarantined at home. Graham describes the time in treatment as “a blur.”

“She has been through hell and back,” Diane said. “She tends to minimize things, but it’s a miracle that she’s here.”

Eventually, her body responded to the transfusions and medication. She told her doctors she wanted to go back to school.

“The doctors advised me not to go back to school, but I just thought, ‘I have a goal. I want to graduate,’ ” Graham said. “So I did.”

Graham said Mason’s Disability Services helped her with encouragement and accommodations. She took as many online classes as she could. Her mother drove her to the classes she had on campus, and described Graham as sometimes sleeping in the car before and after class.

“I watched her bust her fanny,” Diane said. “It has been an ant moving a mountain. There were some days she looked normal and felt great, and you wouldn’t have known she was sick. And there were other days she couldn’t get out of bed, but she did her work.”

While Graham still wants to be a physical therapist, her reasons have changed. She says she now wants to help people get their strength back after going through traumatic medical situations.