After the Beirut explosions, the grandma of this Mason grad brought hope through the piano 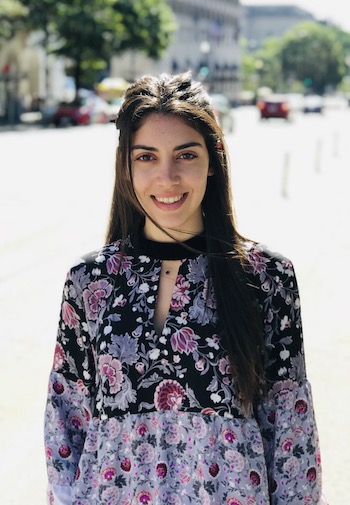 May Abboud Melki’s home was in shambles following the massive August 4 explosion in Beirut, Lebanon. Glass shards from blasted windows and debris filled her home, and nearly everything she owned had been damaged. That is, except for her piano.

Thanks to Melki’s granddaughters, including Amy Melki, a 2020 graduate of George Mason University, beauty and resilience were seen amidst the chaos, as a video they shared on social media of their grandmother playing “Auld Lang Syne” on the piano surrounded by rubble went viral and made international headlines.

“It’s her form of therapy,” said Melki, who received the video via text from her mother in Beirut. “[During the Lebanese Civil War, my grandmother] found something in her music and often reverted to playing the piano as a way of coping with the material loss and the human loss.”

The piano has sentimental value too, Melki said, as her grandmother was gifted it 60 years ago on her honeymoon.

Comments on the video have spoken to how Melki’s grandmother embodies the Lebanese spirit.

“The symbol of true Lebanese resilience isn’t just found in [my grandmother]; it’s found in our nation,” said Melki, who graduated with a master’s in global affairs. “I’m just so proud that she was the one to carry that message and remind people that even in your darkest, most desperate times, we will be able to rebuild.”

Resilience has been part of the Melki family story. Amy Melki’s grandparents survived the 1975-1990 civil war while raising four kids, she said; and her parents, who were refugees escaping war, founded an NGO in Lebanon that works with Syrian refugees and underprivileged communities.

Melki is proud of that history, she said. 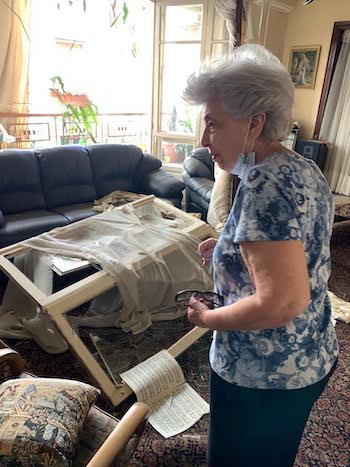 May Abboud Melki assesses the damage to her home after the Beirut explosions. Photo provided.

Melki said she hopes to one day work for the World Bank or an international relief organization.

Right now, she is making an international impact working at Mason. In July, Melki joined the Schar School of Policy and Government’s Global Terrorist Trends and Analysis Center (GTTAC), where she analyzes incidents of global terrorism for a congressionally mandated database.

“I really love it,” Melki said. “It’s such a learning experience and everyone working on it, like Dr. Judy [Deane] and Dr. Mahmut [Cengiz], genuinely care to help you learn and become a better researcher.”

“This tragedy [in Lebanon] took place during the second week of training for our new cohort,” said Deane, deputy director of Mason’s Terrorism, Transnational Crime and Corruption Center (TraCCC). “It must have affected Amy’s ability to concentrate, but it didn’t show in her work.”

“Like Amy, many of our GTTAC staff have had their lives impacted by violence and terrorism, and they understand why it is so important for our project to provide accurate information about these issues to the world,” Deane said. “We feel lucky to have Amy working with us and will benefit from her understanding of the complexities of violence in the Middle East.”

Melki said she wishes such complexities weren’t the reality in Lebanon, but her faith gives her hope. It’s divine intervention, she said, that her grandparents weren’t home during the explosion.

“Although we don’t have all the answers to all of our questions, although we wonder why did this happen, [my grandmother] felt at peace because she was reminded that God is always by her side,” Melki said. “I feel incredibly blessed and grateful that God protected my family.”