Hazel elected rector of Mason Board of Visitors 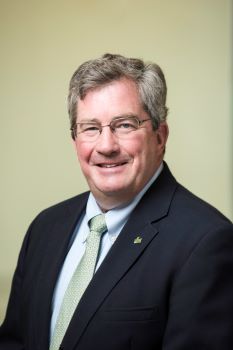 Previous rector Tom Davis, who in May announced his decision to step down as rector with one year remaining in his term, will continue as a BOV member. Davis had served as rector since 2014, one year into his first term on the BOV.

Hazel, a businessman who grew up near the Fairfax Campus, most recently served as vice rector and also co-chaired the presidential search committee that led to the hiring of Washington. Hazel, who has a law degree from Mason, has held several roles at the university, including serving as a member of the George Mason Foundation Board of Trustees and past president of the Alumni Association.

“I don’t think we’ve ever had a rector as prepared to lead as Jimmy Hazel,” Davis said in congratulating Hazel on his election.

Blackman, appointed to the board by then-Gov. Terry McAuliffe in 2017, is vice president, public sector at Edifecs, a health care technology company. He double-majored in American studies and English at Mason, graduating in 1993.

Bhuller, BA Government and International Politics ’02, is executive director of AgencyIQ at POLITICO. Gov. Ralph Northam appointed her to the BOV in 2019.

The rector, vice rector and secretary are elected for two-year terms.