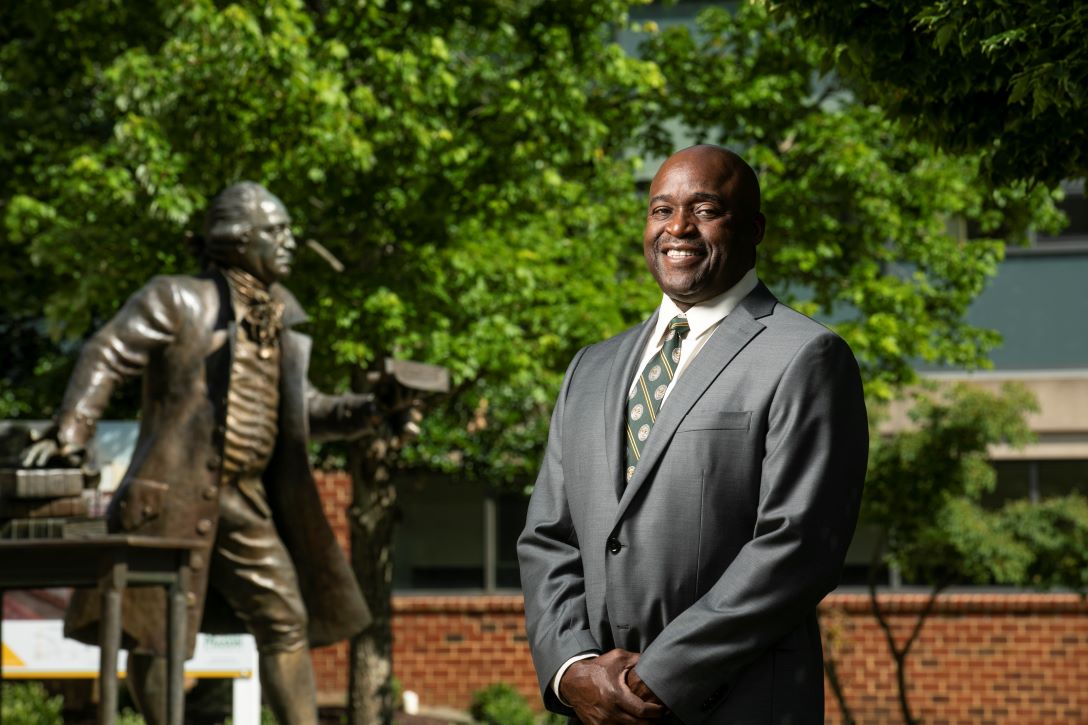 President Gregory Washington has revealed the members of his Anti-Racism and Inclusive Excellence (ARIE) Task Force, a major university-wide initiative that will examine practices and traditions at George Mason University to see if racial biases exist.

The task force, which was first announced in July, is also charged with building intentional systems and standards of anti-racism that will keep racial injustices from regenerating.

The 32-member core task force is headed by co-chairs Shernita Rochelle Parker, Mason’s assistant vice president for HR strategy and talent management, and Wendi Manuel Scott, a professor of history in the School of Integrative Studies within the College of Humanities and Social Sciences and the former director of the African and African American Studies Program. They will be aided by six committees that will examine every aspect of how the university operates, including traditions, student life, hiring, promotion and faculty tenure practices. The committees will include more than 100 people representing all of Mason’s schools, colleges, units and areas of expertise. The hope is to make certain that Mason is an inclusive and equitable campus community where everyone is valued, supported and experiences a sense of belonging.

The committees will identify and make recommendations to improve organizational structures, policies, processes, and practices across the university that are seen as impeding a culture of anti-racism and inclusive excellence. The scope of the work will be broad, with no area of the university off-limits.

The task force, which is being overseen by Dietra Trent, the interim vice president for Compliance, Diversity and Ethics and special advisor to the president, will feature working committees in Training and Development; Campus and Community Engagement; University Policies and Practices; Curriculum and Pedagogy; Student Voice; and Research. An Executive Steering Committee will work with President Washington to help provide governance, guidance and oversight to the task force and committees.

“I am honored that President Washington has entrusted me with this important initiative at this formidable time in our country and honored to work with our task force chairs and committees to see this come to fruition,” Trent said.

The formation of the task force comes amidst the backdrop of the racial unrest that has gripped the nation in recent months following the deaths of several unarmed African-Americans at the hands of police, and fulfills Washington’s pledge upon taking office on July 1 to deliver action and not just words.

Parker lauded the creation of the task force for building upon the Mason mission and story as “a university for the world.”

“With the issues of diversity, inclusion, equity and social justice at the forefront of national events, Dr. Washington’s action has ensured that we step forward to be both in the conversation and take action,” Parker said.

The task force is comprised of many of Mason’s experts in the area of racial justice, as well as numerous national ones. Task force and committee members represent Mason’s full diversity along racial, ethnic, gender, sexual and religious identities.

The task force gathered for the first time on Aug. 25, to formally receive its charge from Washington, and will meet bi-weekly from henceforth before filing its first report by Oct. 30, 2020.

“In the context of what is happening nationally,” Parker said, “the creation of this task force and the work it has been charged to do bring the university into the work of transforming our campus, surrounding community, the Commonwealth of Virginia and potentially the nation.”

Here’s a complete list of the members of the task force and its committees.