Senior sprinted to a leadership role 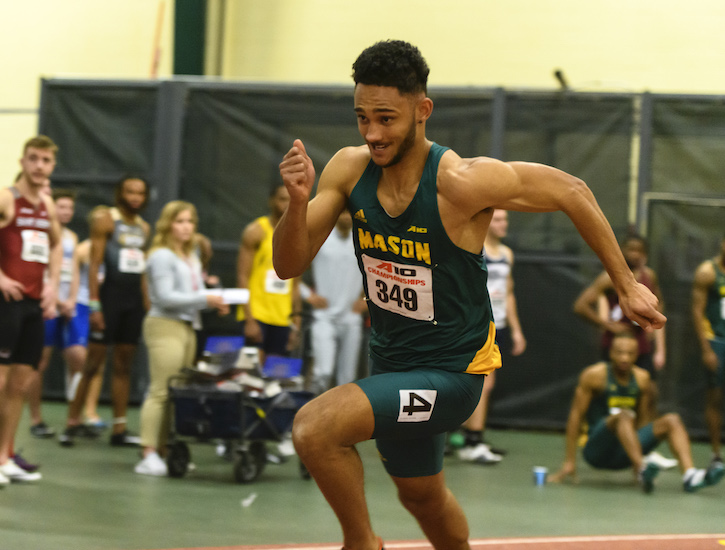 Tyler Benson, a six-time Atlantic 10 champion and part of Mason’s 4x400-meter relay team that qualified for the 2019 NCAA outdoor championships, is hoping for one last season before graduating from Mason. Photo by Rafael Suanes/Mason Athletics.

When the NCAA awarded athletes an extra year of eligibility after spring sports were cancelled because of COVID-19, Tyler Benson saw an opportunity.

The George Mason University sprinter had planned to graduate in December. But with the chance to run as a fifth-year senior and erase a 2020 season shortened by a torn left quadriceps muscle, he changed his graduation plans to spring 2021.

“It’s really frustrating,” said Benson, a six-time Atlantic 10 champion and part of Mason’s 4x400-meter relay team that qualified for the 2019 NCAA outdoor championships. “Nothing is for certain, so it’s difficult.”

Even without athletics, Benson, majoring in information technology with a concentration in information security, is an integral part of the Mason community.

He has been a mainstay at activities on the Fairfax Campus such as Welcome2Mason and Club 4400, and has helped represent Mason at Fairfax City events such as the Chocolate Lovers Festival and Rock The Block. And when a fellow athlete coordinated a elementary school adoption for the track and field team with Daniels Run Elementary School in Fairfax, Benson was all in as well.

It all comes from a mindset that resists what Benson said is the tendency of college students to be self-focused.

“You’re focused on your studies, focused on performing well in the classroom, on the track. It sounds selfish but you have to,” Benson said. “So to step back and help other people is such a rewarding experience.”

“He’s just phenomenal,” said Dawn Hicks, director of community relations for Mason Athletics. “Whatever he can do, he’s willing to do, and if he can adjust his schedule, he’s willing to do that, too. I love his heart because he really has a heart to help others.”

Benson, from Warrenton, Virginia, said he came to Mason to run track and because of the university’s highly regarded cybersecurity program.

Benson was already familiar with the Mason campus. He and his girlfriend, Molly Riley, BS Psychology ’20, attended basketball games with Molly’s parents: Catherine Riley and Jeff Riley, BIS ’92, who played volleyball for the Patriots from 1980-81 and was an assistant athletic director from 1986 to 1995, in charge of ticket operations and events management.

“It’s definitely been what I expected, and probably a little bit more,” Benson said of his time at Mason. “And being in Northern Virginia, this is the best place for cybersecurity and what I want to do in the future.”

He said he has a job offer from a small cybersecurity firm for after he graduates.

The icing on the cake would be a track season.

Things are a bit different this year with the team training while physically distancing for seasons that might not happen. But Coach Andrew Gerard said Benson’s leadership has been consistent.

“What I respect most is the ownership he takes over the team,” Gerard said. “He’s got such a genuine way about him that his teammates relate to very well. He’s really been a leader since he stepped onto campus.”