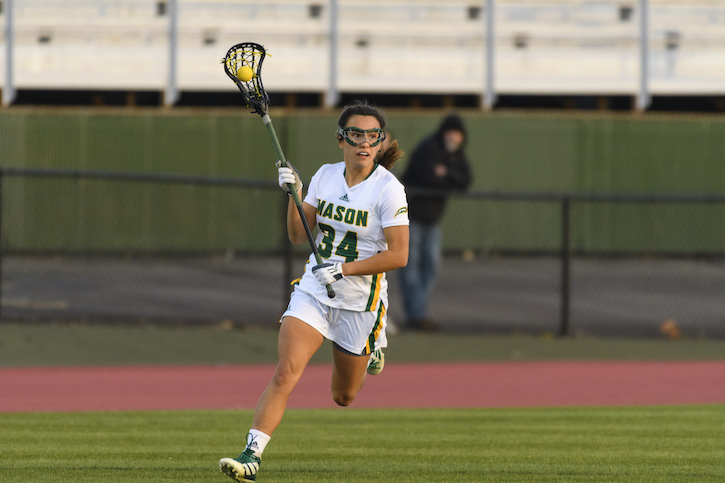 Much of Sasha Silva’s family identity is proudly defined by its Peruvian origins. But Silva’s experience as a first-generation American has enriched her family’s identity with some distinctly stateside components.

That collective includes lacrosse, a sport the George Mason University senior adored as soon as she picked up a stick.

The Annandale, Virginia, native has blossomed into one of the Atlantic 10’s premier defensive players. But as the only Latinx player on the team, her path to that distinction has been unique.

“It’s something I think about constantly, and it really powers me,” Silva said. “I want to represent and show that girls like me can come into a sport and be competitive in Division I athletics. When you don’t see yourself represented in a sport, you feel like there might not be a place for you. But when you see at least one person, you feel you can do it, too.”

Silva’s father Cesar came to the United States as a 19-year-old in 1979. Silva’s mother, Nora Canchez, a lawyer in Peru, came to Northern Virginia in 1996 to join her sister. Cesar and Nora met through mutual friends, married, and had two children, Sasha and her brother, Alexander.

When Silva was growing up, her parents’ backgrounds shaped the culture of the family. As people of Mestizo decent, the family is a blend of indigenous and Spanish ancestry. The melting pot of traditions and customs gave the home a vibrancy that modeled the diversity of Peru’s population.

Nora emphasized the importance of both Spanish and English in the home. The family also made multiple trips to Peru to introduce their children to the country. And once the Smithsonian Institution began hosting a celebration of indigenous cultures, Nora and Cesar made sure the family made the trip to Washington, D.C., to join the festival.

While cultivating that sense of self, Silva also developed an interest in lacrosse. At Annandale High School, Silva was an all-region and all-conference selection as a senior. She said the diversity of Mason’s campus and its proximity to her family made it an easy decision to come to Fairfax, and she wants to study law after graduation.

“During my time with Sasha, it is very apparent she is an extremely determined and strong-willed student-athlete,” Mason women’s lacrosse coach Kara Mupo said. “Her consistent push to raise the bar both as a student and an athlete has made those fortunate enough to work closely with her better.”

“I’m trying to pave my own path,” Silva said. “In our family, going to college in America is a big step.”

While not stepping away from her roots.

Read more about Silva and her family here.