Rupa Mehta is the February 2017 Employee of the Month 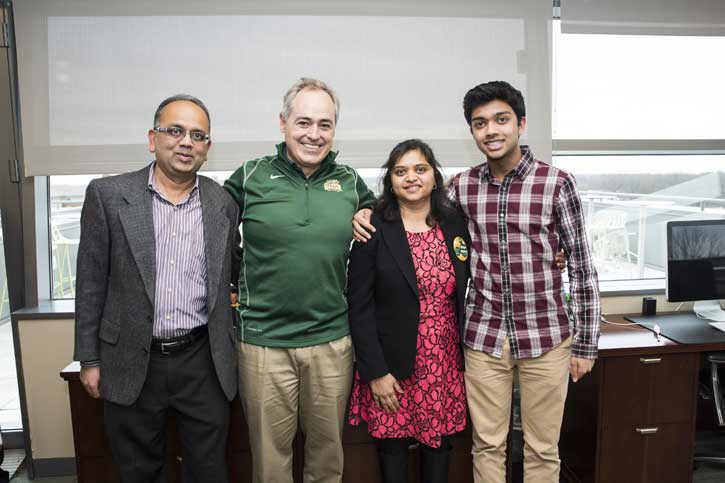 Rupa Mehta, data analyst for enrollment planning and administration in the Provost's office is the February employee of the month. Photo by Ron Aira.

A key player who assists students in the registration process and helps administrators learn more about enrollment trends, Rupa Mehta has a big job at George Mason University, even if it’s not readily noticeable. With a new semester underway and registration at a critical point, Mehta has been chosen as the February Employee of the Month.

Mehta was nominated by Tracey O’Leary, a program analyst at George Mason, who says Mehta “remains unfailingly warm and positive while assisting campus stakeholders with a multitude of requests across the university.”

As a data analyst for enrollment planning and administration in the Office of the Provost, Mehta tracks registration and enrollment data and reports class-size trends and student registration habits to Mason’s colleges and university administration. She also works as a principal business liaison for the functional users in the academic units and the ITS office for MicroStrategy reports, a business intelligence tool.

Laurie Miller, director of IT for the Office of the University Registrar, was on the search committee that recommended hiring Mehta and says she has become a “valuable asset” to the university.

“She isn’t afraid to ask questions. That trait has enabled her to grow professionally and provide an ever-increasing degree of customer support,” Miller said.

During the university’s recent transition to MicroStrategy, Mehta hosted numerous training workshops to help employees work with the new software. Joan Stahle, a program officer manager in the College of Education and Human Development, said Mehta’s effort to make the training simple and valuable for staff has not gone unnoticed.

“Her presentation skills in MicroStrategy training sessions have been very polished and professional. She even inserts a little humor and makes a potentially dull subject interesting,” Stahle said.

Jennifer Bazaz Gettys, associate director for academic affairs in the College of Science, helped with the university’s MicroStrategy testing and says Mehta was always open to her feedback and input on information displays and program errors.

Mehta says working in the university environment is “encouraging,” and she always feels there is something new for her to learn. However, she most enjoys giving back to students with her work, even if they can’t quite see it.

“There’s a satisfaction at the end of the day that I have made a difference and that I impact students with the things that I do,” Mehta said.

Mehta says she is “humbled and deeply honored” to be selected as employee of the month and thankful for co-workers who helped her reach this point in her career.

Mehta will be formally presented with the award by President Ángel Cabrera in his office on the fifth floor of Merten Hall at 3:30 p.m. on Friday, Feb. 3. Mehta’s family, co-workers and friends are all encouraged to attend the ceremony. Those who are unable to attend the ceremony may watch the Facebook livestream at www.facebook.com/workingatmason.