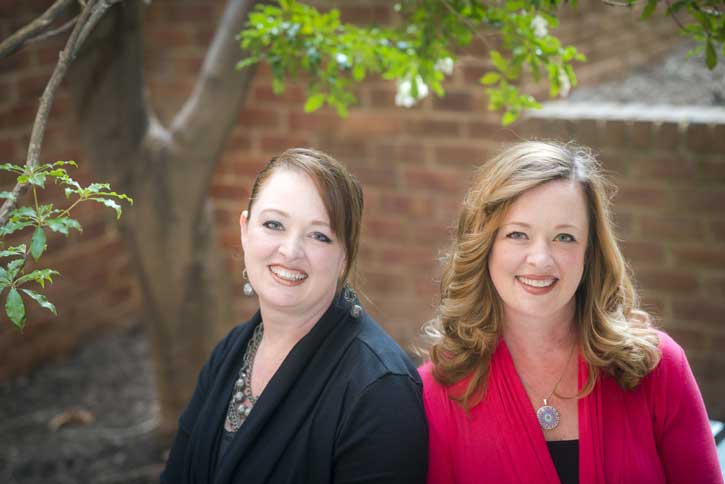 Rebecca (left) and Carrie Sutter, twin sisters and professors in the College of Health and Human Services, were both named Nurse Practitioner of the Year. Photo by Evan Cantwell.

Carrie and Rebecca Sutter have a lot in common. Their looks, obviously—they’re identical twins— and their professions, with both being professors in the School of Nursing at George Mason University. Now they both have won the Virginia Nurse Practitioner State Award for Excellence.

The American Association of Nurse Practitioners awarded the honor to Rebecca Sutter this year; her sister won the same award last year.  But there’s no sibling rivalry here, the Sutters said.

“Our relationship is about collaboration not competition,” Carrie Sutter said.  “When I was awarded last year, it was almost a little difficult to accept the award knowing that she wasn’t given the same recognition, but for her to be recognized this year, it really rounds out the whole experience.”

The sisters say they are lucky to be able to work together.

“Although we are twins we have vastly different skill sets and those skill sets complement each other,” Rebecca Sutter said. “Where I’m weak, Carrie is strong and where Carrie’s weak then I’m strong.”

Rebecca has the ability to see things in a larger, more systemic way. She also is able to have the tough conversations and handle conflict well, her sister said.

Carrie is into the details of executing a project, Rebecca Sutter said, and she has a personal, more gentler approach to matters.

“The one thing that both Becki and I are very good at is educating,” Carrie Sutter said.

They continue to push the envelope, hold their students accountable and make sure they are working at their highest level, Carrie Sutter said.

“We are meant to be in academics and to train the next generation of healthcare providers,” Rebecca Sutter said.  “It’s that ripple effect, watching the students be able to carry on the work.”

They are able to teach students in the nurse-managed Mason and Partners Clinics, which function as active learning labs for students of all levels and multiple disciplines while serving vulnerable populations in Manassas Park and Fairfax County.

Being twins actually helps them to do their work more effectively, the sisters said.

While they don’t communicate telepathically or feel each other’s physical pain, as other multiples claim, they’ve had similar life experiences which enables them to understand each other’s work habits, decisions and ways of communication.

All of this allows them to work together proficiently and efficiently, the sisters said.

“Carrie and I don’t do this work for recognition, we do this work because we honestly in our hearts feel like this is important work,” Rebecca Sutter said.

It’s vital for nurses and advanced practice nurses  to be at the table and be part of the discussions that drive healthcare change, she added.