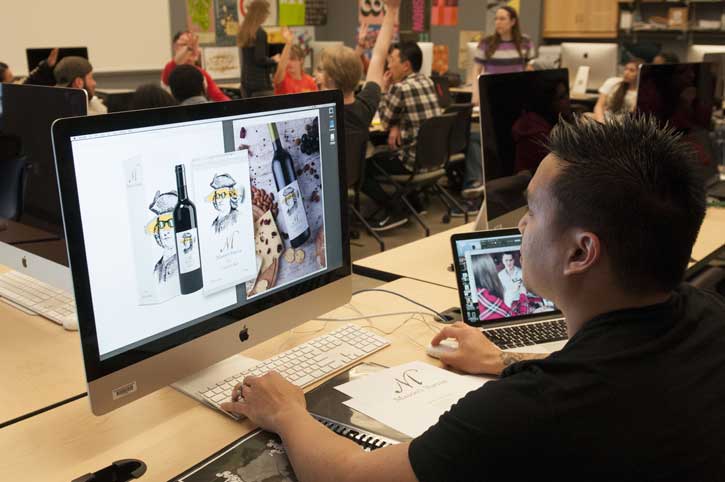 Students in Advertising Design worked on a branding campaign for a Mason wine that is expected to be released this fall. Photo by Alexa Rogers.

George Mason University students in AVT 416: Advertising Design embarked on a journey into a new industry this semester: wine branding.

The project began when School of Art professor Donald Starr was contacted about providing his students with an opportunity to design a brand identity for a wine that George Mason plans to sell to fund school-sponsored student scholarships.

The students were separated into seven groups and began working on the assignment at the beginning of the semester to present to the Mason Foundation Wine Committee on Feb. 16.

The groups started out by choosing a name for their brand, which had to be associated with Mason and its history and values. Some groups went the historical route with “Halcyon Days,” taken from one of statesman George Mason’s historic quotes. Others wanted to represent the university’s pledge to diversity with “Melange.”

Senior art and visual technology major Ernest Chua, whose group chose “The Fourth” as their brand name—the committee favorite—said his group wanted to represent Mason’s many connections to the number four. George Mason IV was sometimes referred to as “The Fourth” and married his wife on April 4th. And Mason, the university, now has four campuses.

“It has a lot of meaning and we felt that it was modular enough that … it could be a story to tell another person you just met. And that’s what Mason is. You connect with people,” Chua said.

The students then moved on to designing the label for both the red and white varietals. Many groups attempted to find juxtaposition between traditional and modern with their use of calligraphy and script texts and a simplistic look. The winning design, branded as “Mason’s Virtue,” features a script text with a tear in the label and an image of George Mason wearing neon green sunglasses.

The students then created different collateral items to go along with their brand, everything from business cards to Instagram pages to mockups of actual wine barrels. These items helped promote each team’s brand during its presentations.

The collateral items made it feel real, said senior art and visual technology major Lauren Ray, and made it “more than just a wine brand but an extension of Mason itself.”

The project was faster paced than a typical school assignment and project particulars were always updating, which senior art and visual technology major Christian Inguillo, a member of the group with the winning design, said really changed the way he worked on the assignment.

These types of client-based projects, Starr says, help students gain real-world experience with the support and guidance of an academic classroom.

The intent, he said, is to “be able to provide our students with professional opportunities to show their work and do the work they will be doing once they leave us.”

The wine is expected to be released in late fall of this year.