Class of 2017: For Mason senior, postgraduate options mean opportunities to change the world through education 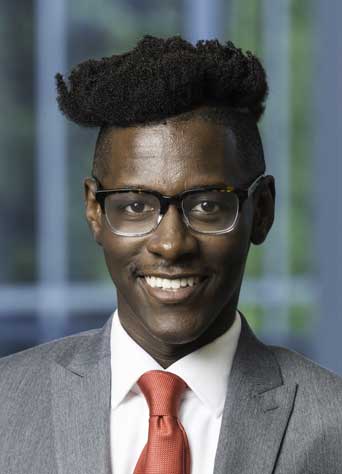 If one thing is abundantly clear about Desmond Moffitt’s postgraduate situation, it’s this: The guy’s got options.

The George Mason University history major is graduating this month and has been accepted into graduate school at Columbia University’s Teachers College. He’s also advancing in the process of becoming a New Millennial Public Policy Fellow. The fellowship would allow him to work in Washington, D.C., on education policy initiatives for the New America think tank.

He’s also the winner of the 2017 Urban Leaders Fellowship, which would support his work this summer with Oakland Promise, a cradle-to-career program that focuses on tripling the number of college graduates from Oakland, Calif., within a decade.

He would like to spend the summer working with young people, but the move wouldn’t be easy or cheap, Moffitt said.

“I would be picking up my entire life and moving to California. When making this decision, it’s key to think about your well-being and your mental head space,” he said. “It sounds good but in reality, what does that look like?”

Moffitt‘s dedication to school-aged children became apparent his freshman year at George Mason, when he and a group of his peers from the Honors College started MasonU.

“The mission was to provide campus tours to low-income students, kindergarten through eighth grade, in Northern Virginia and D.C.,” he said “I had the privilege and honor to work with more than 2,000 students across 16 schools.”

MasonU helped not only the younger students, but also the Mason students, Moffitt added.

“The second purpose was to expose Honors College students to narratives outside of their own,” he said. “One of my mentors came to me and cried. She said, ‘I saw myself in that girl.’ You can’t make that, you can’t teach that. That’s a story all on its own.”

One of his life’s goals is to create a program where preservice teachers are required to have a semester of cultural competency training followed by studying abroad for one semester.

“The only reason why you can’t connect with a student is that they feel like you can’t understand them. Cultural competency training in America—as diverse as it is—will allow students to be receptive to the experiences teachers have to offer as social change agents,” he said.

Zofia Burr, dean of Mason’s Honors College, says she fully expects him to go on to make significant contributions to the education system in the United States.

“Desmond’s generosity of spirit, dedication to inclusion and true compassion toward all members of the community has made him highly effective as a student and community member,” she said.

Another option for Moffitt, who attended Mason as a Gates Millennium Scholar, is to continue his employment with his soon-to-be alma mater.

“I’ve also been working for the study-abroad office and they would like to keep me on,” said Moffitt, who traveled extensively, once through study abroad, during his undergraduate career.

“That’s really my option, to pump the brakes a little bit; everything is moving really fast with graduation and being an adult. I want to celebrate, but coming to college has shown me that I haven’t even started what I want to do.”