Class of 2017: Mason Senior of the Year thrives on promoting campus organizations 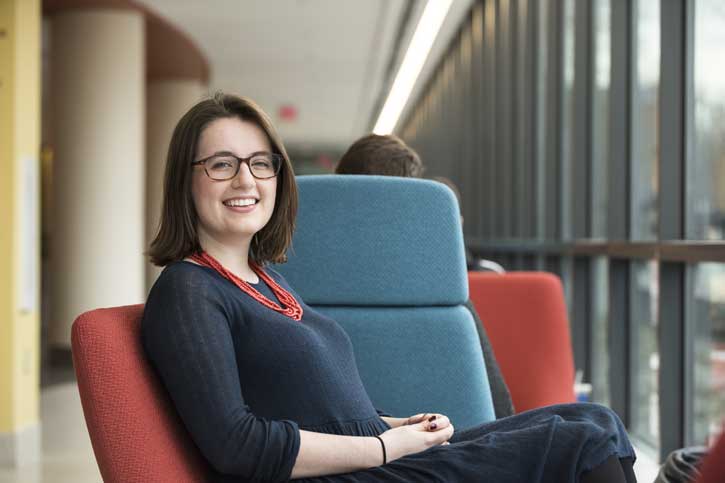 As a teenager she already had her eye on the Far East, spending her high school sophomore year in a boarding school in Mussoorie, India.

She continued to study Hindi and U.S.-India relations on climate change as a University Scholar in George Mason University’s Honors College, but senior Beverly Harp said she’s lately been quite focused on things closer to home, particularly campus groups.

“I didn’t study abroad during the school year, because I had these organizations that I really cared about. There’s so many opportunities on this campus to do things; I was really excited to dedicate a lot of my time to organizing and building things with students,” she said.

The global affairs major poured her time into co-founding Roosevelt at George Mason, a chapter of the Roosevelt Institute, a public policy organization that fosters a network of student-run think tanks.

“It’s been quite a journey, but we have really grown,” she said. “We have 40 to 60 people attending our weekly meetings. It’s become a community for people and a great platform to do advocacy or any intellectual work.”

After its first year, Roosevelt at Mason was named the best new chapter by the national organization. Harp was asked to mentor other new chapters in the region, said Anthony Dyer Hoefer, assistant dean of Mason’s Honors College.

“Her aim has been to foster an organization that is sturdy enough to thrive through the leadership transitions that often slow down or even end student organizations,” he said.

Harp’s enthusiasm for public service, commitment to campus organizations and knack for leadership are some of the reasons why she is Mason’s Senior of the Year.

During her college career, Harp’s attention was also focused on helping her peers aid grade-school students from groups underrepresented on college campuses through the organization MasonU.

“It gives them the opportunity to see what college life is like and to get a vision of what college could be for them,” she said.

She found MasonU to be both motivating and educational, and since at some point she’d like to be a teacher, it was a good fit. The group focused on the middle school age group because research revealed mentoring is especially crucial if middle schoolers are to be steered toward college.

Though she’s been busy on campus, her three study-abroad trips to India have made her global affairs studies at Mason much fuller, Harp said. She’ll be returning to India this August on a Fulbright Scholarship to complete a yearlong research project on climate finance.

“I’m just really grateful to have gotten to come to Mason and to have learned from people who are much smarter than me and who have different experiences than me,” she said.

Harp was presented with her award at the annual Celebration of Distinction, sponsored by the Alumni Association, on April 26.