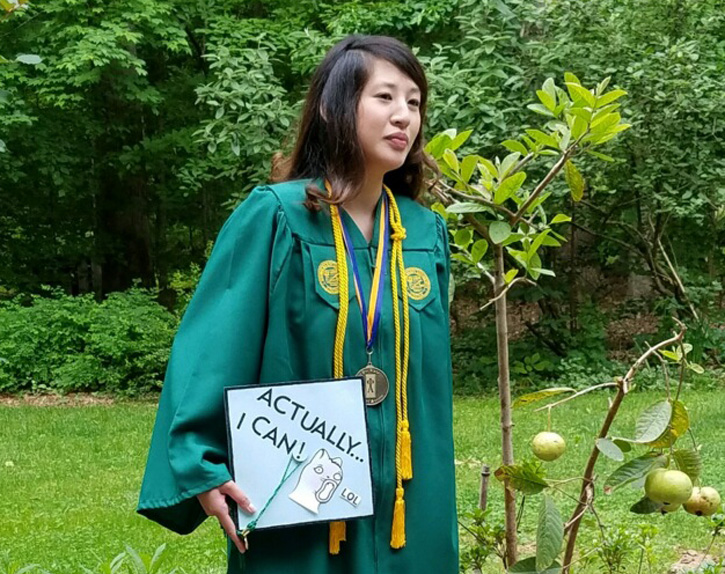 She worked in Falls Church at Capital Caring, a nonprofit that provides holistic care to seriously ill people living at home or in assisted living facilities.

As she managed her caseload, she noticed a disparity in the race of the patients.

“Most of the clients were Caucasian,” she said. “I decided to do research on why there is a disparity among minorities for hospice utilization.”

She was able to find a lot of research literature on the African American community and its underutilization of hospice.

“I found there’s a lot of misrepresentation of what hospice is, sometimes people think of it as out-of-home and that it speeds up the dying process,” Campos said.

This misrepresentation of hospice is also present among whites and the highly educated; many people don’t understand hospice care can be done in the home, at nursing homes and assisted care facilities, she said.

Campos, whose parents were born in the Philippines, said she was particularly interested in why there was a lack of Filipino-Americans using hospice, but not much research had been done into that population.

With a grant from the Office of Student Scholarship, Creative Activities and Research, she was able to conduct an exploratory study on Filipino-Americans and hospice. Exploratory studies are used to gain an understanding of certain perspectives or motivations.

She used the research she found on African Americans and hospice to craft questions that she used in hour-long interviews with 10 Filipino-Americans over the age of 40.

While younger Filipinos understood hospice, many of the older generation didn’t know what it was, Campos said.

Once they learned about it, they said it was something worth considering, she said.

“Also, they are more comfortable with caretakers who are Filipino,” Campos said.

Research shows there is a general mistrust of medical professionals in the African American community, she said.

“I think that might be one of the reasons why a Filipino would want only a Filipino nurse. There’s that relatability they have.”

Filipinos are very family oriented, so once they understood there is in-home hospice care, the option became more appealing to them, Campos said she discovered.

“Real-world research has helped with my career goals because it is imperative to keep up with the paradigm shifts and tailor interventions accordingly to such shifts,” she said. “Exploratory research has helped me to figure out the uniqueness of each culture in hopes that all cultures have access to beneficial services.”

Before she starts graduate school at the University of Pennsylvania in July, Campos said she is turning her research into a book manuscript for later publication.

“She is very passionate about the topic that she has been working on,” said Mason social work professor Megumi Inoue, who is working with Campos on the manuscript. “She knows the current literature and gaps existing in the literature. Her study will make an important contribution.”

One of the things she loves most about social work is the research aspect. She’s happy she studied at Mason because of its R1 ranking by the Carnegie Classification for Institutions of Higher Learning, Campos said.

“You need to constantly evaluate your interventions to see if they are working … evidence is vital to social work,” she said.