Working to prevent Ebola in Cameroon and identifying what pathogen caused multiple hospitalizations on a small Pacific island are just some of the experiences professor Julia Painter brings from the field and into the classrooms of George Mason University.

Before joining the College of Health and Human Services at George Mason in 2015, Painter worked at the Centers for Disease Control and Prevention (CDC) in Atlanta as one of its Epidemic Intelligence Service officers—the first boots-on-the-ground detectives that respond to infectious and noninfectious disease outbreaks and other matters of public health.

Her two years in the CDC’s Waterborne Disease Prevention Branch included analytic and field work, experiences Painter said she draws from to enrich the learning of Mason students, especially those in the Infectious Disease Epidemiology graduate course.

In 2013, when she was fresh out of training, the CDC dispatched her to Baker City, Ore., where an outbreak of cryptosporidiosis, a diarrheal disease brought on by a waterborne parasite, caused the first community-wide drinking water outbreak in the United States in 20 years.

Painter, working closely with state and local public health officials, helped conduct household surveys and answer questions from local authorities during the outbreak. They later determined it was likely caused by fecal matter from cattle living on nearby ranches, close to the watershed, coupled with an unfiltered water system and recent heavy rainfall.

She uses her experience of responding to an outbreak of diarrheal illness in American Samoa in the South Pacific to show students how different methods can be combined to identify the cause of an outbreak. Local public health officials originally suspected amebiasis, a parasitic infection of the intestines, was the sickness causing an abnormally high number of people to seek care at the hospital on the island, Painter said. But DNA testing on samples sent back to the CDC in Atlanta determined it was actually shigellosis, a disease caused by a group of bacteria.

“I use that experience to show how epidemiologic and lab data can work together to solve outbreaks,” she said. 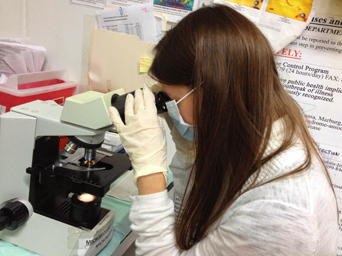 Painter examines a stool sample under a microscope in American Samoa in June 2014. Photo provided.

In 2014, Painter also spent several weeks in Cameroon, one of the neighboring countries of those with reported Ebola cases.

As an Epidemic Intelligence Service officer “alumni,” Painter is part of a network of experts in her field.

“I learned the importance of not being siloed into either research or practice. It’s important for everyone to be aware of each other’s work and to make and keep connections,” she said.

That networking lets her bring other experts into her classroom—often via Skype or Facetime—to lecture on their areas of expertise. For the past two years during Public Health Week in April, Painter has arranged for a panel of current and former Epidemic Intelligence Service officers to answer questions from students after a public screening of “Contagion,” a movie about a deadly, highly communicable virus investigated by the CDC.

“The panel addresses questions about Hollywood vs. reality when it comes to CDC outbreak investigations,” she said.

“It was really great for my students to see what [epidemiology] looks like so close to home,” Painter said. “You don’t have to go to the CDC. You can see frontline epidemiology in your own backyard.”