One was a child when she helped kicked the door down on Jim Crow in New Orleans, while the other overcame a significant language barrier in a foreign land thousands of miles away from home.

George Mason University student graduation speakers Terri Dickerson and Delia Dragan have each overcome obstacles that might have caused less determined people to give up. And both graduating students credit their time at George Mason for helping better prepare them to pass along those critical lessons to those who will follow them.

Terri A. Dickerson earned a PhD in conflict analysis and resolution. Photo by Ron Aira.

The wife of a retired Army colonel and mother of three adult children, Dickerson, 60, already held degrees from the University of Virginia and Johns Hopkins when she began work at Mason on her PhD in conflict analysis and resolution.

But it was her experience as one of the first African-American children to integrate Catholic schools in New Orleans that first helped define her, deepening her empathy for marginalized people who feel helpless in the face of systemic injustice.

Dickerson, who braved all kinds of indignities when walking through all-white neighborhoods to attend previously all-white Catholic schools, focused her research at Mason on what black children such as herself endured in helping to create positive social change.

“Black children helped the Catholic Church to overcome a shameful history of discrimination, and their role was largely ignored,” said Dickerson, a career federal employee. “When our parents sent us into those schools, they were striking at the heart of an institution that had labeled us as intellectually and socially inferior. It was on us to enter the spaces and make integration successful.”

She quickly found a supportive, multicultural environment at Mason that exceeded her expectations. She even spent a semester abroad in Rome to gain a deeper understanding of the Catholic Church at an institutional level.

Dickerson was inducted into Mason’s Epsilon Delta Chapter of Phi Beta Delta, an honor society for international scholars, and served as an expert for the School for Conflict Analysis and Resolution’s Dialogue and Difference series.

A 2015 graduate of the S-CAR certificate program on Collaborative Community Practices, she also earned the 2016 Provost’s Award, as well as the S-CAR 2015 James H. Laue Memorial Scholarship and the 2016 Alumni Award.

“I am interested in applying my findings to other domains that are preparing to include groups marginalized by society – whether because of income, sexual identity, disability or any other personal factor,” Dickerson said. 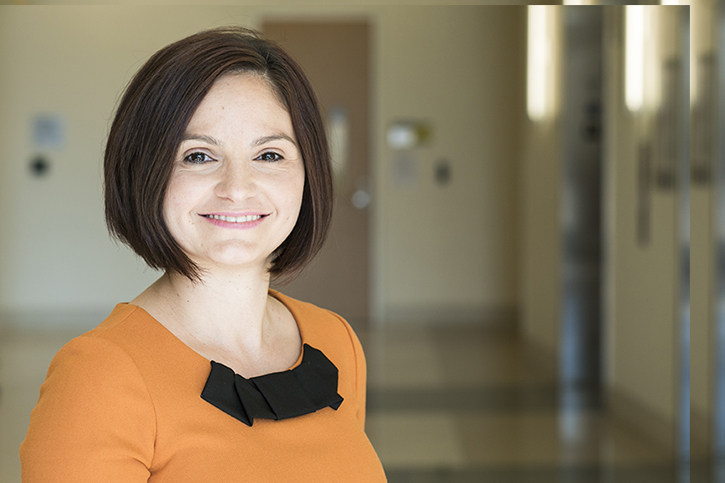 Delia Dragan earned a master of education degree in curriculum and instruction. Photo by Ron Aira.

Dragan, a 37-year-old Romanian native, will be receiving a master of education in curriculum and instruction.

She first came to the United States as an au pair 13 years ago and was immediately attracted to the diverse population and quality of education available at Mason.

It wasn’t easy, as she had only limited English skills at the time. Dragan struggled initially in getting the score necessary on the Test of English as a Foreign Language to gain admittance into Mason’s College of Education and Human Development. TOEFL measures the ability of non-native English speakers to use and understand the English language as it is heard, spoken and read in a university classroom.

But she stayed the course, passed the TOEFL substitute test and began as a non-degree student, working diligently to master her academic English skills by participating in different workshops and other educational functions within the Mason community.

“There were times when I felt homesick and just unable to move forward,” she said, “but I’ve received great support and encouragement that I can succeed.”

Along the way, she has traveled extensively across the United States to experience a slew of memorable moments in her newfound home.

Dragan, who holds a bachelor of science in geography, was later initiated into the Mason chapter of The Honor Society of Phi Kappa Phi in April 2016. She looks forward to paying things forward by teaching English to K-12 students.

“My American dream came true,” Dragan said. “I was able to study at a remarkable university and to succeed. Now it is my turn to teach English to our newly arrived students.”