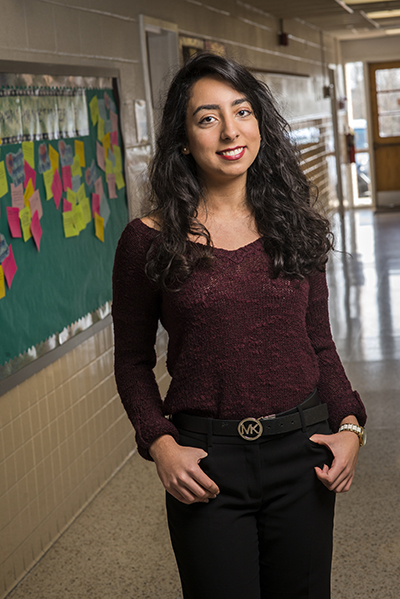 Within a week, Imadi came up with the idea of a centralized community-based mentorship program that could offer support for high school students facing linguistic, socioeconomic, and other challenges outside of school. A year later, as a college freshman in the Honors College at George Mason, she turned her idea into the nonprofit organization InvestinYOUth.

Imadi knew firsthand the impact a school’s resources could have on a student, and she used that as inspiration for her project. Having moved from a rural community back to Fairfax County, she was troubled by the drastic change in the quality of her education and wondered why other students did not have access to the same standards that exist in Fairfax County Public Schools.

“I didn’t think it was fair that I had access to more resources, and students in other areas of the state did not,” she says.

She researched the impact of demographic change and the suburbanization of poverty on local public school systems for her HNRS 110 class. She discovered that social programming needs did not match the new student population, as funding allocation could not sufficiently match the needs of the population changes.

Imadi saw that students with limited proficiency in English and students facing poverty due to high living expenses were especially at risk. She started InvestinYOUth to help connect these at-risk high school students with college mentors.

“I think connecting peers in college to students in high school is especially impactful,” she says. “It can inspire students and show them they can achieve and take hold of their destiny, just as the diverse group of our student mentors have, who come from all walks of life.”

Imadi plans to expand InvestinYOUth across universities in Virginia where communities are facing similar challenges. She hopes her program will be the answer for those struggling to succeed in school due to circumstances beyond their control.

“I hope we can be those mentors that help push [these students] to reach their fullest potential by providing them the opportunity to better their academic or life skills,” she says.

Ultimately, InvestinYOUth and its members hope to be the initiative that helps Virginia’s public universities foster partnerships with secondary schools to provide free tutoring and mentorship within their communities, which lack the funds to do so.

“Universities can be more than just places of academia,” says Imadi. “We’re proof of the larger role in the community that we can play as students, and as resources for the progress of our society.”