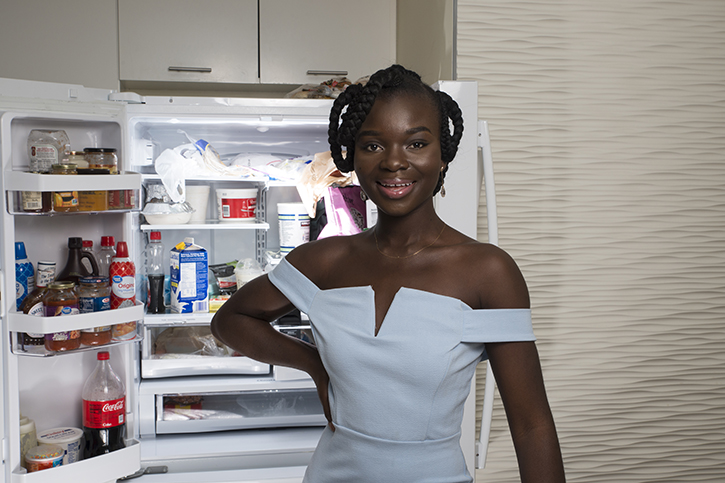 Senya Donkor is the executive producer and host of Mason Munchies on the Mason Cable Network, a cooking show that promotes healthy and tasty meals for the average college student with an infusion of style and fun. Photo by Bethany Camp.

Senya Donkor learned how to cook by watching her parents in their West African home.

So it’s no surprise that her Mason Cable Network show, Mason Munchies, which airs every Tuesday at 9 p.m. on MCN channel 8.1, includes influences from home, mixed with her focus of healthy eating habits and tasty meals for college students on a budget.

“I’m not afraid to infuse my own culture. I think that’s very important,” said Donkor.

Donkor, a senior integrative studies major, is also the executive producer of the show. She approached the student-run MCN with the concept because she didn’t see anything else like it on the network. Her sassy persona and unique fashion sense is what sets her apart from your ordinary cooking show.

She also takes the opportunity when cooking to de-stress, and isn’t afraid to improvise or make changes to her recipes.

“I hope after watching my show, students can learn to get creative in the kitchen. Hopefully, they’ll come to understand that the first time it may not taste good, the second time it may be too salty, but by the fifth time, you’ve got it. You just have to laugh about it, and have fun.”

She seems to have the winning recipe. When the first season aired in the fall semester, Donkor bought her own groceries and filmed her segments in the kitchen of her Potomac Heights residence hall. This semester, her show is sponsored by Giant in University Mall, and she has established on-campus partnerships as well.

“We’ve partnered with the GMU Organic Garden Association to supply us with fresh produce from the Green House and Potomac Heights’ garden on campus. We’ve also begun working with Mason Dining this semester to push well-being and mindfulness initiatives, in addition to exploring different cultural and nutritional cuisines this semester,” said Donkor.

She also promotes the Patriot Pantry after each show to help students who might be food insecure.

“This semester we’ll be working alongside other chefs and nutrition experts in the Southside kitchen, and doing tours of all the dining halls.”

As Donkor gears up for graduation in a May, she hopes the foundation she’s built for Mason Munchies will continue.

“Someone had asked me why I didn’t name the show after myself, but I felt that the focus didn’t need to be on me. In the future, hopefully other students can be innovative with the concept of the show and make it their own,” said Donkor.

With a sole desire to entertain, Donkor hopes to work with various media outlets in the entertainment industry and pursue acting, singing, and modeling.