For Mason junior, the show always must go on 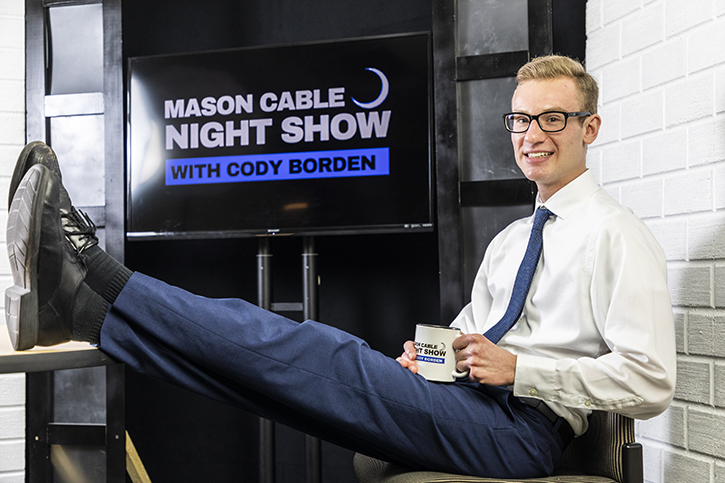 Cody Borden was in a panic.

This was a real problem because the segment, which was to run during Borden’s special Halloween edition, was to be shot at the one-night-only Clifton Haunted Trail.

But after a flurry of emails to some of his current and former professors, Borden had his replacement: communication professor Tim Gibson, who instructs Borden in his COMM 380 Media Criticism class.

“He was so enthusiastic about it,” Borden said, “and it came out to be a great segment.”

Borden, a junior majoring in communication from Winchester, Virginia, has dealt with last-minute glitches before. As front man and the creative force behind his twice-monthly show, it is part of the territory that allows him to do what he likes best—be the host.

In fact, if things go as Borden hopes, he will one day host his own late-night talk show. He said he has been a fan of late-night television since he was 14 years old and sees himself in the mold of Jimmy Fallon, who stars on NBC’s The Tonight Show.

“He’s high-energy, enthusiastic and not afraid to do things out of the ordinary,” Borden said.

That is why you will see segments on the Mason Cable Night Show in which Borden practices with Mason’s Brazilian Jiu Jitsu Club (he had no previous jiu-jitsu experience) and skates with the men’s club hockey team (he had never before been on ice skates).

Angelique Arintok, general manager of the Mason Cable Network (MCN), said Borden’s show averages between 50 and 200 views on YouTube, one of the highest view rates of the network’s 10 student-produced shows.

“His ability to connect with the students and the organizations he comes across is really awesome,” said Arintok, a senior also majoring in communication who handles the Mason Cable Night Show’s behind-the-scenes production. “That is really what the show is all about, and he handles it well.”

Though Borden dreams of late-night stardom, he also understands it is a long shot, which is why he has taken advantage of opportunities at Mason to hone his sound and video production skills.

Borden works the camera and control board during MCN’s live news telecasts. During basketball games, he works at Mason’s radio station, WGMU, to set up the live streams and coordinate with the play-by-play announcers to make sure they are on the air and in and out of commercial breaks on time.

“If I can’t get something in front of the camera, I know at least I’ll be able to get something behind the camera,” Borden said of his future job prospects. “I’ve made myself well-rounded in that respect.”

“He’s one of the most reliable engineers I’ve had in 20-plus years supervising these games,” said Rodger Smith, WGMU’s faculty advisor. “He keeps a cool head when things go wrong.”

Which brings us back to the Clifton Haunted Trail, where Gibson was impressed by how Borden, Arintok and MCN assistant production manager Cruz Sanchez, a sophomore communication major and Honors College member, set up the video shoot, with cameras in front and behind as Borden and Gibson walked the route. Each was also hooked up to a GoPro camera.

“They had a really creative plan to put this together,” Gibson said. “It was fun.”

That kind of feedback helps keep Borden’s dreams of a late-night slot alive. So he studies Fallon for his funny segments and Stephen Colbert for his interviewing expertise.

“I know he thinks this is an improbable dream for him, but I don’t think so,” Arintok said. “He’s a hard worker, and if he takes the right steps in the right direction, he’ll wind up there.”