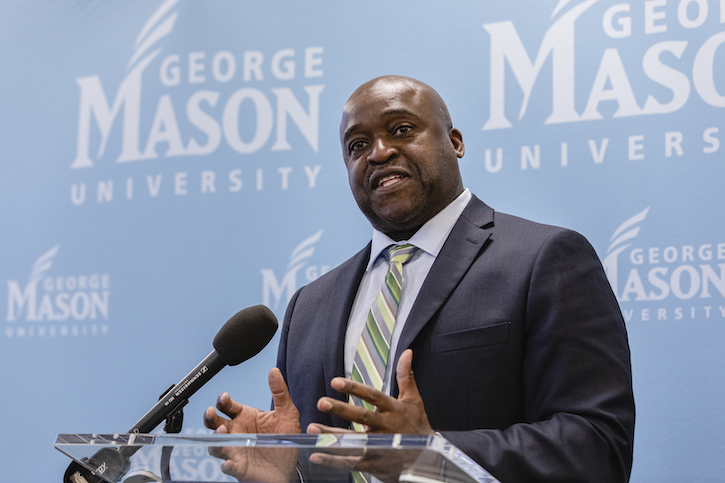 Gregory Washington told regional and campus media that Mason's story is his story at his first press conference as George Mason University's eighth president. Photo by Lathan Goumas/Office of Communications and Marketing.

Newly selected George Mason University President Gregory Washington told a group of journalists Thursday that he’s “ecstatic” to be the school’s eighth president. He will join the university on July 1, 2020.

After a whirlwind tour of Mason’s campuses in Arlington and Manassas, Washington met with regional and campus media, including The Washington Post, Washington Business Journal, Associated Press, Diverse Issues in Higher Education, DVM, and local affiliates for NBC and Fox, along with The Fourth Estate, WGMU and Freshman Focus.

Washington said he was impressed with Mason as an institution that has combined world-class research  with access to excellence.

Mason, Washington said, is set up to be “one of the beacons for the country.” 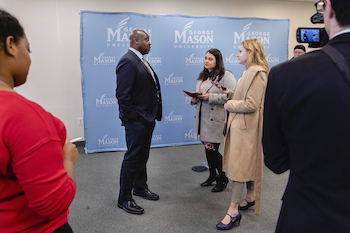 “I recognize that the story of this institution parallels and is my story,” said Washington.

Washington said that he would be a strong supporter of programs promoting equal access to education, such as Mason’s Early Identification Program and its ADVANCE transfer pathway program.

“I have seen the power that education has in changing the fortunes of families,” said Washington. “I’ve lived that.”

Washington is dean of the Henry Samueli School of Engineering at University of California, Irvine. He earned his bachelor’s, master’s and PhD degrees in mechanical engineering at North Carolina State University. Learn more about his career.

During his meeting with regional and campus media, Washington introduced his wife, Nicole, and praised both Mason and the Northern Virginia community.

“This is a great fit for me personally,” said Washington. “This one just feels right.”