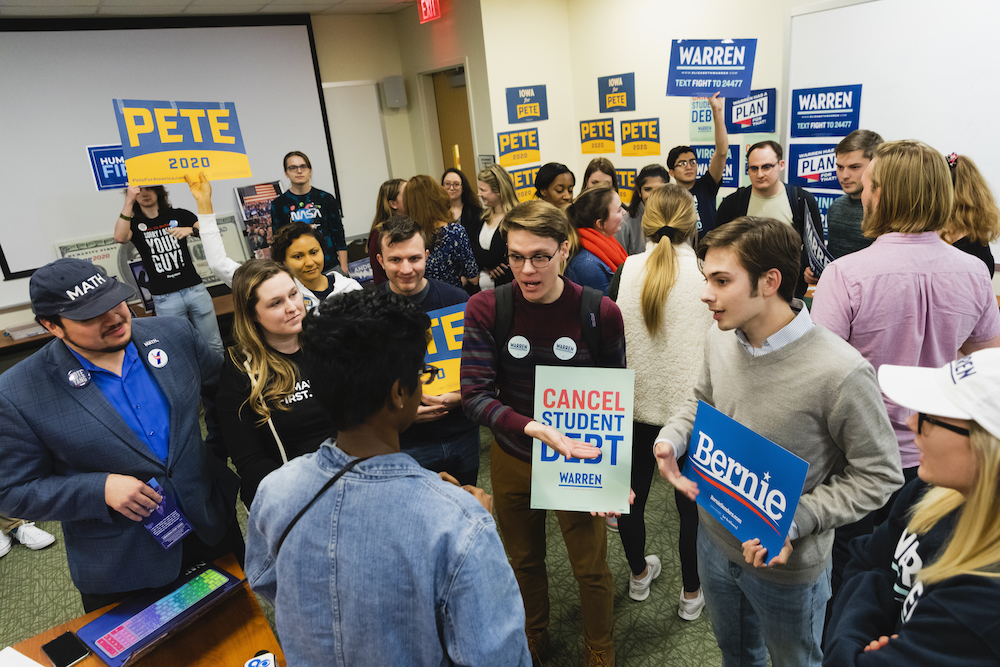 People try and convince a caucus goer to pick a candidate during the 2020 Iowa Caucus at George Mason University. The university served as a satellite location for people to caucus. Photo by Lathan Goumas/Office of Communications and Marketing

Who will be the Democratic Party’s next presidential nominee? Registered voters from Iowa who couldn’t be in the Hawkeye State for the Feb. 3 presidential caucus had the chance to vote with their feet at George Mason University, one of 87 satellite sites.

The caucus, which replaces a traditional primary where votes are tallied by ballot, allows voters to choose their preferred candidate by walking to the candidates’ designated spot around the room.

“It’s a great opportunity to make firsthand observations of the kick-off political event of the 2020 presidential election cycle,” said Schar School of Policy and Government professor Jennifer Victor, who invited her class to observe the event. “With the satellite caucuses this year, we have a rare, and quite convenient, opportunity to see the process in person. This was an exciting time and a unique opportunity for students.”

Fifteen Iowans, including several Mason students, participated in Monday’s caucus in Merten Hall on the Fairfax Campus. Mary Beth Armstrong, a junior in the environmental and sustainability studies program, led the event as caucus chair.

“I was really worried that I wasn’t going to be able to caucus, and so to not only be able to caucus for my first time, but also to lead a caucus was an unforgettable experience,” Armstrong said.

During the first round of voting, eight people gathered for Elizabeth Warren, four caucused for Bernie Sanders, two selected Amy Klobuchar, and one person voted for Tulsi Gabbard. Joe Biden, Pete Buttigieg and Andrew Yang did not receive votes. 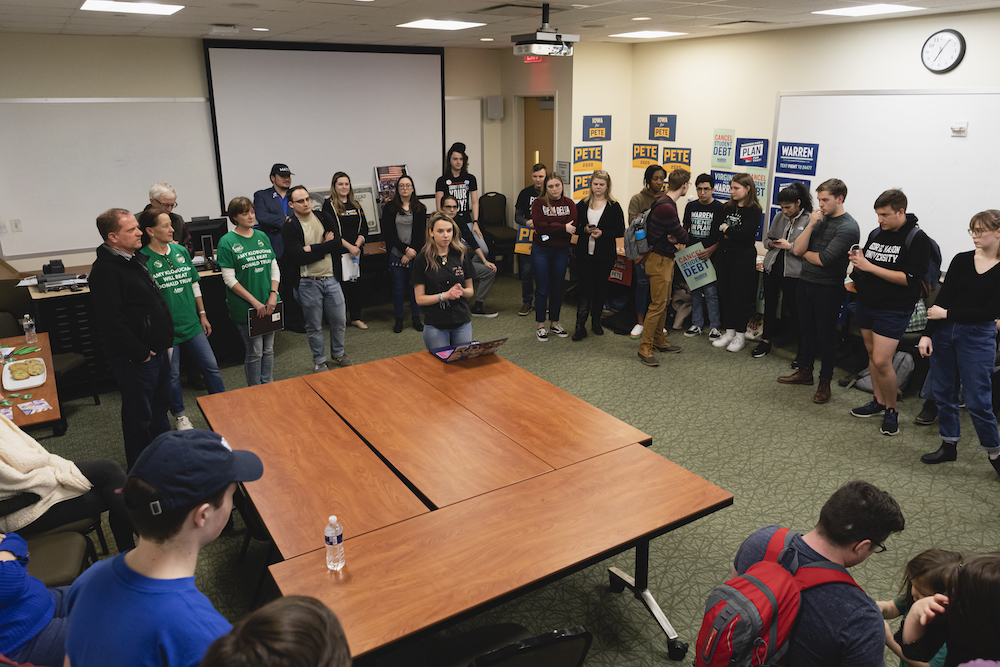 Junior Mary Beth Armstrong (center circle) leads the Iowa Caucus at George Mason University. The university served as a satellite location for people to caucus. Photo by Lathan Goumas/Office of Communications and Marketing

For a candidate to be considered viable, 15% or more of the voters have to back that candidate. Because Gabbard received one vote, the person who caucused for her had to “realign.” Before he did so, the voter heard speeches from representatives of the other viable candidates.

“Having the ability to try to win over, or at least clearly communicate why I’m voting, is something that’s super important to me,” Thompson said. “It’s a really cool opportunity to actually implement what we study in the classroom into real life.”

The voter realigned to Sanders’ group, making the final votes eight for Warren, five for Sanders, and two for Klobuchar.

There was a lot of excitement, even for the spectators.

“Tonight is going to decide a lot of things and affect the country for the next year or hopefully beyond, so I’m glad to be here,” said Seth Mahowald, a junior government and international politics major from Massachusetts.

“I’ve watched [the Iowa caucus] on TV tons of times, but I’ve always wanted to see that process go down,” Weiser said. “It was intriguing to watch history unfold, especially in this monumental election coming up—knowing that you are part of that Iowa caucus, regardless of if we caucused or not, it’s still pretty cool.”