For this incoming freshman, Mason speaks her language

There are times, Daniela Martinez admitted, that she gets the four languages she speaks confused in her head.

Like the time in China when she inadvertently answered a question in French.

Martinez, from Baton Rouge, Louisiana, and an incoming freshman at George Mason University, is a true polyglot with fluency, in addition to English, in Spanish, French and Chinese.

No surprise, then, Martinez will major in foreign languages with a concentration in Chinese. Global affairs will be her second major, and she will minor in intelligence studies.

Martinez’s language skills grew partly out of expediency. Her mother is from Honduras and spoke to her daughter often in Spanish, which Martinez has practiced on several trips to that country, Spain and Mexico.

The language immersion program at Baton Rouge Magnet High School allowed Martinez to study Spanish and French. She also studied Chinese, and as a senior earned a scholarship with the U.S. State Department’s National Security Language Initiative for Youth that sent her to Chengdu, China, for six weeks to sharpen her skills. 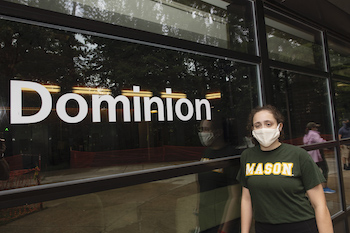 “Chinese is a critical language, so it’s very important to world affairs in the U.S. today,” said Martinez, a member of Mason’s Honors College and a University Scholar with a full tuition scholarship. “Being able to combine that with the global affairs major, those two would go pretty well considering the climate we have with China today.”

It also goes well with her ambition to work as an intern in the Chinese embassy in Washington, D.C. If not, an internship with the French or Spanish embassies would do just as well.

In fact, it was Mason’s proximity to Washington that helped attract Martinez to the university, along with the intelligence studies minor she said she could not find at other universities.

Then there was the good word from her high school friend Madeline Anderson, who also attends Mason, majoring in global affairs and French.

“I told her of all the experiences I have gained from Mason,” said Anderson, a junior in the Honors College and a University Scholar. “I fell in love with the entire atmosphere. I was surrounded by people who had backgrounds from all over. Mason made me feel like I could have a home in a state so far away.”

Mason will be richer, too, for the experiences Martinez brings to the university, in part through her knowledge gained from international travel—something her mother promotes—which also includes trips to England, France and Argentina.

It is her trip to China, though, that resonates most—so much so, Martinez said she sees herself one day working in China or returning just to visit her former host family in Chengdu.

“As a culture, it’s beautiful,” Martinez said. “And the people were just so nice and welcoming.”

Even when she inadvertently spoke to them in the wrong language.