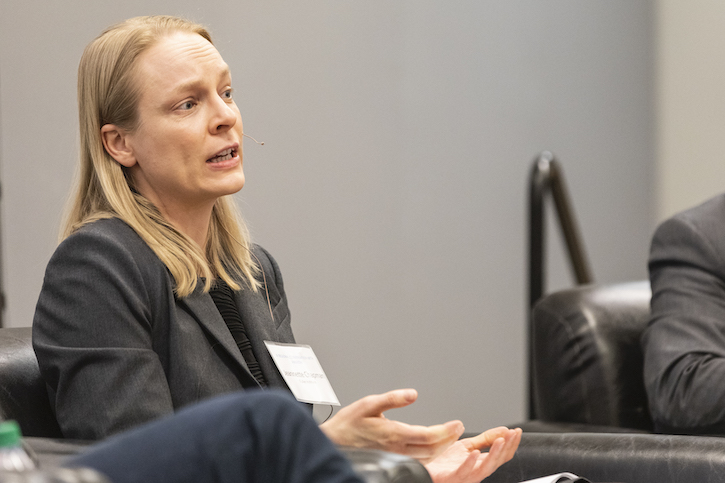 Jeannette Chapman talks during a panel discussion about Amazon's selection of Arlington for a second headquarters held by the Metropolitan Washington Council of Governments hosted by George Mason. Photo by Lathan Goumas/Strategic Communications

When it comes to making informed decisions for government, businesses, and the community, it’s important to have lots of information. For the Greater Washington area, leaders in those spheres rely on reports and analyses to ensure the best choices are made for the region’s future. In many ways, they are relying on Jeannette Chapman.

Chapman, the director of George Mason University’s Stephen S. Fuller Institute, is a leading analyst who provides critical insight on the region’s economy. In July, she was recognized as a Top 40 Under 40 by Washington Business Journal (WBJ).

“One of the things I always appreciate about the [WBJ] lists is that they do find the people that are behind the scenes,” said Chapman, a Richmond native and graduate of Mason’s master’s in public policy program. “It’s a fantastic recognition and I’m very pleased to be in such good company.”

Nominations for the list come from WBJ readers and the region’s business community. Alumni of the 40 Under 40 program and WBJ editors then evaluate nominees based on “the impact each individual has made within their industry and the work they have accomplished in the community through philanthropic work,” said Emily VanZandt, WBJ special projects editor.

Chapman, who has worked at Mason since 2013, became director of the Fuller Institute last year, after the center’s namesake retired.

“Jeannette has convincingly settled the issue whether anyone could ably replace the great Steve Fuller after his five-decades run as the leading analyst of the D.C. regional economy,” said Schar School of Policy and Government Dean Mark J. Rozell. “The Fuller Institute has not missed a step with the transition to her leadership.”

Others who have worked with both economists agree.

“Having worked closely with Steve Fuller for more than 10 years through the 2030 Group, I can attest to his thorough knowledge of our region and regional economy,” said 2030 Group President Bob Buchanan. “Jeannette was Steve’s assistant who learned so well that she was everyone’s choice to succeed Steve upon his retirement.”

“Equally important was the appreciation of Jeannette’s youth, energy and commitment to comprehend the unprecedented transformation going on in our region at this seminal time,” he said.

On any given day, Chapman researches what she calls “the fundamentals”—trends facing the housing market, employment or demographics. She also explores time-sensitive topics, such government shutdowns or the arrival of Amazon HQ2. Recently, she has focused on how COVID is impacting the economy.

“It’s exciting,” Chapman said. “At the end of the day, we will all need this information.”

“The goal is to frame two scenarios,” Chapman said, “in the absence of an intervention and with one.”

Her analysis has impact, but it is not easy. Depending on the topic, the research could take more than a year. That’s par for the course when analyzing abstract problems, Chapman said, but she’s passionate about it.

“I like not knowing what I’m going to learn each day,” she said. “I go in with a research question and I don’t have an answer. That’s the ideal situation.”