Popular Zombies class digs up history of the living dead 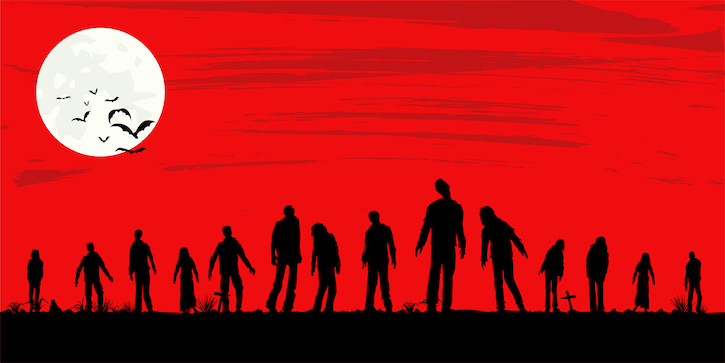 For one group of George Mason University students, the week leading up to Halloween has involved reading up on horror filmmaker George Romeo and discussing zombies in the cinema. This isn’t just a spooky break from the regular curriculum—these students have spent the semester studying the undead in the course ANTH 314 Zombies.

More than 140 students are enrolled in the online anthropology class that “looks at the cultures where zombies and related folklore about the undead come from, and examines zombies from an ethnohistorical, medical anthropology, and anthropology of religion perspectives,” according to the syllabus.

This is the first time Cultural Studies doctoral student Terilee Edwards-Hewitt has taught the course, and she feels like it is the perfect fit for her background.

“The topic ties in with my interest in popular culture,” said Edwards-Hewitt, who has been teaching in the Washington, D.C., metropolitan area for 15 years. “A big part of my current research is about popular culture in the United States, specifically fan cultures.”

Edwards-Hewitt worked on two different medical anthropology research projects while she was a research assistant at Howard University, and she has also taught the anthropology of religion at the University of Maryland. She believes both contribute to understanding zombies.

“Zombies touches on aspects of medical anthropology and anthropology of religion,” said Edwards-Hewitt. “To understand zombies, we need to look at how cultures define health, illness, life, and death.”

The class has also read about how enslaved people are involved in the zombie origins. The people who were enslaved who came West Africa had a cultural belief that was similar to zombies, but it involved someone capturing another’s spirit, said Edwards-Hewitt.

Among the enslaved people in Haiti and the Caribbean that idea moves closer to what we now recognize as a zombie.

“It later became that they—usually a bad sorcerer in the folktales—would control your body, so you have no agency,” said Edwards-Hewitt, who also devotes some of her time to Alexandria Archaeology Museum in Alexandria, Virginia.

The class also discusses zombies in popular culture and even has a week that focuses on the television show and graphic novel “The Walking Dead.” For a class project, students are expected to do a cultural analysis of two zombie movies from a list Edwards-Hewitt has compiled.

“I want the students to look at these films critically and discuss what it is saying about the culture,” she said.

When asked if she has any favorites in the zombie genre, Edwards-Hewitt mentions “Warm Bodies,” “28 Days Later,” and “Shaun of the Dead.”

“’Shaun of the Dead’ is a particularly good one,” she said. “There are so many cultural references in that movie, including references to consumer culture and terrorism. Something that is really interesting about zombies is how what they represent in U.S. culture has changed since they first entered the popular culture in the 1930s.”

“It would be so awesome to teach this class face to face [one day] because I would more easily show relevant clips from television and film to illustrate the points,” she said.

“Zombies are everywhere is popular culture, which makes sense since they help us to understand so many elements of the modern human condition,” said Amy L. Best, chair of the Department of Sociology and Anthropology in the College of Humanities and Social Sciences. “Students across disciplines are fascinated by the walking dead and what they represent, which is why we offer a course. If the zombie apocalypse is coming, I take heart in knowing at least our students will be well prepared for it.”