Mason alumnus Michael A. Bills reflects on his 42-year career in the U.S. Army 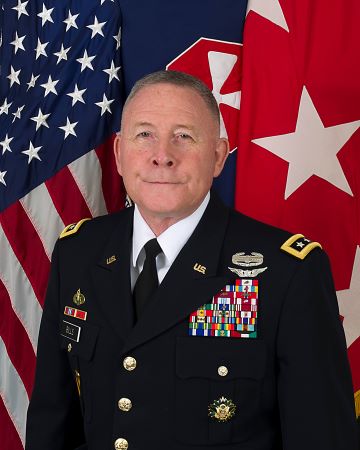 U.S. Army Lt. Gen. and Mason alumnus Michael A. Bills recently stepped down as the commanding general of the Eighth U.S. Army in South Korea. Photo courtesy of the U.S. Army.

The journey had come full circle by the time George Mason University graduate Michael A. Bills concluded his storied military career as the U.S. Army lieutenant general in charge of the military force largely responsible for the defense of South Korea.

Bills is now retired after recently stepping down as the Commanding General of the Eighth U.S. Army during a formal ceremony at Camp Humphreys in South Korea. It’s the same base where he began his military career in 1976 as a young private who enlisted in the military after graduating from West Springfield (Virginia) High School.

“It’s been some ride,” he said. “To go from [a private] to lieutenant general is quite the journey.”

Bills, a former ROTC cadet who graduated with a bachelor of arts degree in sociology in 1984, hopes to share some of his many experiences with the Mason community this week during the virtual social hour that begins at 12:15 p.m. on Friday, Nov. 13, as part of the university’s Veterans Week festivities.

Now married with three adult sons and 29 moves to his family’s credit, Bills first arrived in South Korea as an 18-year-old Chinook helicopter mechanic and crew chief. He leaves the Army with 42 years of service, the last two spent overseeing one of the most critical commands in the entire U.S. military.

As the Eighth Army commanding general, Bills oversaw six major subordinate commands, as well as smaller units across the entire Korean peninsula. Bills was in charge of a headquarters that commands and controls the Army forces in South Korea and chief of staff for the U.S. combined force charged with the defense of the Republic of Korea.

“Lieutenant General Bills has brought tremendous energy, a tenacious work ethic and a warrior’s ethos to every unit he has served in,” Gen. Robert B. Abrams, the commander of U.S. Forces Korea, said during Bills’ retirement ceremony on Oct. 2.

Heady praise for a guy who first spent three years as an enlisted man before enrolling at Mason in 1979 because of the ROTC program it offered. Bills said he thoroughly enjoyed his time at Mason and remains a huge fan of the university, so much so that he even hosted an on-campus ROTC Commissioning Ceremony in 2017 while temporarily back in the United States from Korea.

“I was humbled, and it was an honor to do that,” he said. “It was great to be back and be part of the ROTC program.”

Taking care of his soldiers and their families was always Bills’ top priority, said his son, Matt Bills.

“The number of service members who start in the enlisted ranks and end at the flag rank is incredibly small,” Matt Bills said. The fact that his father experienced the military from both the enlisted and officer perspectives made him a more effective leader, his son said. “I often heard him say, ‘I know how General Bills will be treated. How will Private Bills be treated?’ ”

The retired three-star general and his wife, Megan, a 1983 Mason graduate, now call St. Augustine, Florida, their home, where the avid golf enthusiast has already begun honing his game.

“I’ve been kind of pinching myself,” he said. “It’s been very relaxing so far—no e-mails, no phone calls. It’s been nice to spend some time with my wife, Megan.”

A veteran of Operation Desert Storm in Iraq, Operation Iraqi Freedom in Iraq and Operation Enduring Freedom in Afghanistan, Bills previously commanded the Army’s famed 3rd Armored Cavalry Regiment, as well as the 1st Cavalry Division. He is a recipient of the Silver Star, the Bronze Star and the Distinguished Service Medal, while his badges include the Army Aviation Badge and the Combat Action Badge, among others.